Beto O'Rourke: Your Fifteen Minutes are Up Along with the Rest of the Democrats

Between speaking in Spanish and campaigning in Mexico for the American Presidential nomination, Robert Francis O'Rourke, and the rest of the gun confiscation Democrats, better listen well: Your 15 minutes are up. 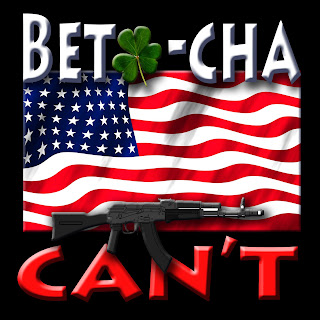 The Democratic Presidential hopefuls have done nothing but embarrass themselves and the United States of America with their behavior, antics, and downright lunacy. Yelling about Climate Change, that does not exist to couple it with carbon taxes and the Green New Deal, which would kill this nation is nothing short of treason. Then to top themselves, the Democrats go after the Second Amendment and demand gun confiscation.

Beto O'Rourke is quoted as saying about mass shootings that ended up on a Tshirt: “This is F*cked up.” The only thing that is fucked up, Democrats, is that you are unable to read the Bill of Rights:

A well regulated militia, being necessary to the security of a free state, the right of the people to keep and bear arms, shall not be infringed.

The last four words are: shall not be infringed. You may want to read those words again. You seem to not have gotten the gist the first time.

You can research the Bill of Rights online like the VDP Gazette did and see that the 2nd Amendment also means:

In the 2008 case District of Columbia v. Heller, the Supreme Court held that the "Second Amendment protects an individual right to possess a firearm unconnected with service in a militia, and to use that arm for traditionally lawful purposes, such as self-defense within the home."

Unlike Kamala Harris': "Yes, we can..." goes against the Bill of Rights in an act of treason against the American people and she would sign an unlawful Executive Order to confiscate guns from law abiding citizens, which is an impeachable offense, is more about her character of "do as I say and not as I do."

Ms. Harris has her own security detail. Until you give up ALL of your security, weapons, and any means of self defense as a candidate, politician, and especially as a front runner (if you make it after that debacle), you have no soapbox in which to stand to demand anything from me and the Second Amendment. If you believe that no guns, or as they're called: gun free zones, are good enough for me, then you first, lady.

So the Democrats have given us 10 candidates which appears that only one, Joe Biden, knows and understands the law.

Plus, my shirt is so much better: