Do You Want Some Cancer with Your Water? 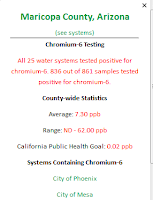 The elephant in the room is really the under-reported and understated neurotoxin, fluoride, that is prevalent in municipal drinking water. Talk about cancer.

When are cities and towns going to realize that our drinking water is not as safe as they would like us to think, and instead of hiding that fact, to actually make the water safe?

And, History Repeats Itself


Those who do not know history are doomed to repeat it. The United States is in the midst of a historical political rebellion. Here is some history written in the years leading up to the Declaration of Independence.

Does any of this sound familiar to today's struggles against the corrupt and useless Globalist machine of imperialism?

The American Revolution was precipitated, in part, by a series of laws passed between 1763 and 1775 that regulating trade and taxes. This legislation caused tensions between colonists and imperial officials, who made it clear that the British Parliament would not address American complaints that the new laws were onerous. British unwillingness to respond to American demands for change allowed colonists to argue that they were part of an increasingly corrupt and autocratic empire in which their traditional liberties were threatened. This position eventually served as the basis for the colonial Declaration of Independence.

In 1763, the British government emerged from the Seven Years’ War burdened by heavy debts. This led British Prime Minister George Grenville to reduce duties on sugar and molasses but also to enforce the law more strictly. Since enforcement of these duties had previously been lax, this ultimately increased revenue for the British Government and served to increase the taxes paid by the colonists. The colonial governments of New York and Massachusetts sent formal letters of protest to Parliament.

The end of the war had also brought about a postwar recession, and British merchants began to request payment for debts that colonists had incurred buying British imports. Moreover, they wanted payment in British pounds sterling rather than colonial currency of more questionable value. The result was that the British Parliament passed the 1764 Currency Act which forbade the colonies from issuing paper currency. This made it even more difficult for colonists to pay their debts and taxes.

Soon after Parliament passed the Currency Act, Prime Minister Grenville proposed a Stamp Tax. This law would require colonists to purchase a government-issued stamp for legal documents and other paper goods. Grenville submitted the bill to Parliament for questioning, and only one member raised objections to Parliament’s right to tax the colonies.

After news of the successful passage of the Stamp Act reached the colonies, the Virginia House of Burgesses passed resolutions denying the British Parliament’s authority to tax the colonies. In Boston, colonists rioted and destroyed the house of the stamp distributor. News of these protests inspired similar activities and protests in other colonies, and thus the Stamp Act served as a common cause to unite the 13 colonies in opposition to the British Parliament. In October of 1765, delegates from 9 colonies met to issue petitions to the British Government denying Parliament’s authority to tax the colonies. An American boycott of British goods, coupled with recession, also led British merchants to lobby for the act’s repeal on pragmatic economic grounds. Under pressure from American colonists and British merchants, the British Government decided it was easier to repeal the Stamp Act than to enforce it.

The repeal of the Stamp Act temporarily quieted colonial protest, but there was renewed resistance to new taxes instituted in 1767 under the Townshend Acts. However, in 1773, the colonists staged more vocal widespread protests against the British Parliament’s decision to grant the East India Company a monopoly on the tax-free transport of tea. Although Parliament did lower taxes levied on other tea importers, the tax-free status of the British East India Company meant that colonial tea traders could not compete. Enraged colonists responded by encouraging a general boycott of British goods. On December 16, 1773, American colonists disguised as Indians boarded East India Company ships in Boston Harbor and threw crates of tea overboard. This famous protest came to be known as the Boston Tea Party.

When news of the Tea Party reached England, British officials moved to enforce discipline and order in the colonies. The British Government ordered the closure of the port of Boston until the East India Company was compensated for the destroyed tea. Parliament also passed several pieces of legislation in 1774 which attempted to place Massachusetts under direct British control. In the American colonies, these laws were referred to as the Intolerable Acts. British control was further solidified by the appointment of General Thomas Gage as military governor of Massachusetts.

By 1774, opinion among the colonists was mixed. Some Bostonians felt that the time had come to ease tensions and sent to London a written offer to pay for the destroyed tea. Others put out a colony-wide call for a boycott. However, many colonial merchants were reluctant to participate in a difficult-to-enforce boycott. Despite this disagreement, most colonists agreed that a meeting to discuss an appropriate collective response to British actions was a good idea. Colonial legislatures sent representatives to Philadelphia, and the First Continental Congress convened in September of 1774. The Continental Congress agreed to the Articles of Association on October 20. These Articles listed colonial grievances and called for a locally-enforced boycott in all the colonies to take effect on December 1. The delegates also drafted a petition to King George III laying out their grievances, although by then they doubted that the crisis would be resolved peacefully.

Realizing that further coercive steps would only enrage the colonists and might lead to war, British military governor Gage wrote to London recommending suspension of the Intolerable Acts. Gage hoped to appease many of the colonists and thereby split colonial moderates from radicals. If London was not amenable to his recommendations, Gage stated that he would need significant reinforcements to crush the growing rebellion.

British ministers responded to Gage’s suggestions by removing him from his post. They felt that further punitive measures were necessary and pushed Parliament to pass additional trade restrictions on New England. London declared the colonies to be in rebellion, but also offered to stop taxing those colonies that supported the British Government.

By this time, the most astute leaders from both sides viewed armed conflict as inevitable. Gage’s attempts to secure his position in Boston only brought him into conflict with local militias and a hostile populace, and it was only a matter of time until open war began in 1775. The opportunity for peaceful negotiation came to an end, and the war for American Independence began on April 19, 1775 when British troops and American colonists clashed at Lexington and Concord.

Americans, isn't it time for a new declaration?

Source: Office of the Historian