“…[T]here will come a day when we will realize Jeffrey Epstein was the most prolific pedophile this country has ever known,” and Disgustedly [Amy] Robach states: “I had it all three years ago.”

"The only thing necessary for the triumph of evil is for good men to do nothing," but can we honestly say that sacrificing girls and women to a pedophile / human trafficking ring makes do nothings good?

Amy Robach, you protected the elite and sacrificed those girls and women. You bowed down to your corporate masters for about a $300,000 per year salary. Is that all your soul is worth? A paltry three hundred grand?

When journalists become yellow bellies people get hurt. People die. Journalists are supposed to be the Fourth Estate and call out judicial injustices, government overreach, and corporate corruption. The problem is journalists have become the entitled establishment. Too weak to do any heavy lifting, unless of course their bosses tell them they are allowed to have such spines.

“The Palace found out that we had her whole allegations about Prince Andrew and threatened us a million different ways.”

And you now take your orders from the Queen of England? Did you just admit that you and ABC are complicit in election meddling with a foreign government? So it is not the Russians? But the English? Do the 17 intelligence agencies who blame President Trump and the nonexistent Russian collusion on Hillary Clinton's continued public losses know the problem is really with the United Kingdom?

“It Was Unbelievable… We Had – Clinton, We Had Everything…”

Because Clinton was implicated while his wife was a Presidential Candidate and this information was hidden from voters? ...according to NBC, Robach's interview with Virginia Roberts was in 2015... Did you have a case against Former President William Jefferson Clinton and buried the story to save his wife's failed attempt at the highest office in the land?

You convinced her but wouldn't stand by her. What makes you any different than Clinton or Epstein?

Um, first of all, I was told “Who’s Jeffrey Epstein.  No one knows who that is.  This is a stupid story.”

Yeah, probably the men above you are in Epstein's little black book along with their friends. Did you ever think to investigate that angle?

No, of course not. Your salary is too precious to actually be a journalist and investigate.

The excuses begin now that you and ABC have been caught undermining the public trust.
Your interview did not meet ABC's standards? First off, ABC has actual standards? I guess those standards of conspiracy theories and other unsubstantiated reporting of President Trump just slides on by the "standards," right? How many times have you regurgitated lies and misconceptions about President Trump's policies or actions to be on the anti-Trump bandwagon?

When journalists do not do their jobs and report their investigative findings in order to save face for corporate and bureaucratic lifers, that endangers our republic.

Irresponsible behavior sacrifices women like Virginia Roberts. When are you going to investigate how Epstein and other politico's influences have also made you an accessory after the fact in human sex trafficking? Who at ABC has been blackmailed into silencing you?

Or, are you just too yella to find out?

Posted by Villa de Paz Gazette at 1:07 AM

Treason: Military Dismantling and Gun Confiscation Only the Beginning of HR 1111 Peacebuilding for United Nations Absorption of the United States 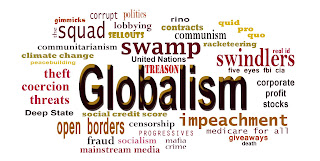 Want to know what the overthrow of the United States looks like?

A BILL
To establish a Department of Peacebuilding, and for other purposes.