This statement is what kneeling is all about:


"I am not going to stand up to show pride in a flag for a country that oppresses black people and people of color," Kaepernick told NFL Media in an exclusive interview after the game. "To me, this is bigger than football and it would be selfish on my part to look the other way. There are bodies in the street and people getting paid leave and getting away with murder."

So Mr. Kaepernick disrespects our nation as a whole for the zero credibility of his statement. He has done no research. He has no facts to back up his tantrum.

Sorry, but there are no heaps of bodies due to any type of racism in the streets. If people would like to look up the statistics, then only major body count in the FBI statistics is black on black violence. White on black violence is small in comparison. Officer involved deaths are smaller yet.

Read the VDP Gazette article: Blue Lives Matter for Us to Tell the Truth: 2016 Statistical Crime Data Shows No Racism for a research starting point.

I wrote on their [National Women's Soccer League/NWSL] Facebook page, I hope you do too:

I heard that there was kneeling and wearing BLM shirts... you do know that the BLM is not a legal IRS charity and it's founders are "trained Marxists" in their own words, don't you? The group is going into businesses and extorting them... the group's riots have killed more black people in a few weeks than any questionable police situation has done in two years. 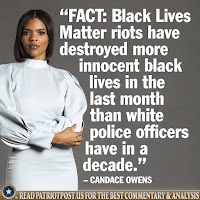 The group has committed sedition and treason as one leader stated: If America ‘Doesn’t Give Us What We Want, We Will Burn Down this System.

The group committed torture and murder: On Friday night Black Lives Matter protesters in Portland boarded + nailed black owned businesses shut + a police building & set them on fire, with people inside... being complicit with communists is against federal law: Communist Control Act of 1954.

I will be putting in a complaint with any sports authority and law enforcement to look into your activities that promote treason. I don't want my taxpayer money going to these types of negative activities.
_____

America needs to defund all the communist and their sympathizers organizations as well as confiscate the wealth of anyone directly or indirectly funding these riots. That includes political parties, media outlets, and sports teams.

The NWSL, NFL, NASCAR, MLB, and anyone else who fits in the category of aiding and abetting domestic terrorism should be arrested and upon conviction to never see the light of day again outside of a maximum security prison.

If black lives mattered to the delusional mass hysteria on our streets, then Chicago, Baltimore, and Detroit would be first on the agenda to clean up and end the homicide spree, not dead patriots carved into statutes.


“There is another class of coloured people who make a business of keeping the troubles, the wrongs, and the hardships of the Negro race before the public. Having learned that they are able to make a living out of their troubles, they have grown into the settled habit of advertising their wrongs — partly because they want sympathy and partly because it pays. Some of these people do not want the Negro to lose his grievances, because they do not want to lose their jobs.”

So stop living off the pain of others and telling people its because of racism.

The racism is your own mental illness projected onto the rest of us.