You like to point your finger and lay the blame on someone else. That is all you do. So stop using the race bait or the police brutality card. You are responsible for Mr. Floyd's death and you are going to have to come to grips with this reality. 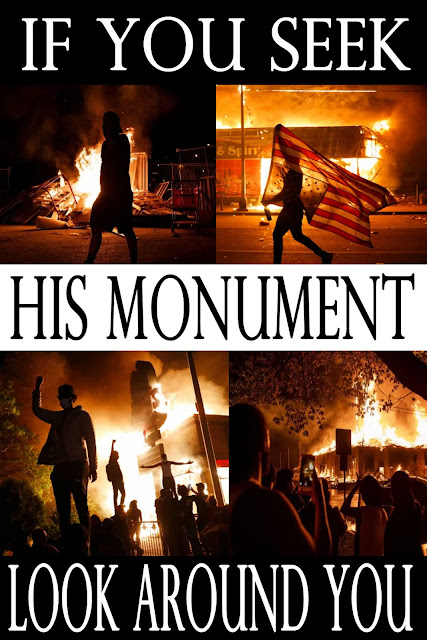 Or, are you going to protest and protest, then demonstrate, and then riot because instead of changing the climate of how police can manage people who have been arrested, you do not do anything but act up, act out, and act like a child?

Protesting for twenty years? Oppressed for 200... 400 years? Have you really been around that long...

You complain no one hears your voice but you refuse to speak the language of the law.

The United States of America is a Constitutional Republic. Learn the Constitution and the Bill of Rights. Read the Declaration of Independence. So when you speak, you do not need a translator. You speak the language of the nation. Then you can change the way the nation speaks.

Change comes when you choose to change. Change is within, not without. You cannot change the outside until you change the inside.

It's time to put away childish things... like signs and posters. It is time to get educated, gain experience, and become the change you have been looking for. No one else can do it but you. Become a lawyer. Become a doctor. Become a lawmaker. Just, become something other than a useless, cry baby Social Justice Warrior.

The Rule of Law is our justice. It is the language of the People. It is our culture.

Social Justice is for children who cannot cope with the realities of life.

So the next time you see an injustice, then change it through your education and experience. America does not need another person so selfish and apathetic to jump ahead in line with a sign believing change comes with a fist in the air. That particular change is nothing but servitude of the people to ruthless dictators. The People are never served by those individuals who only serve themselves.

Change comes with a price more dear: your actual participation in the system of life as an adult responsible for your actions, and your inactions. George Floyd is dead because of your inactions. Your inability to take responsibility as a member of our Constitutional Republic.

When you do point a finger at someone to blame the next time an injustice happens, remember to point that digit straight at yourself.