Leaked Video Shows How Barack Obama was NEVER My President 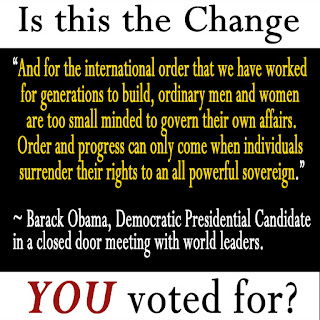 I have been down with an illness induced injury and have been mulling the idea of hanging it up because there is little to no support unless you are corporate or male or conservative. I am disabled, woman, and middle of the road, classical liberal.

Then this video came across my desk and now I have a new lease on crankiness. So, if you think your cranky, disabled editor was annoying before, you haven't seen anything yet.

“And for the international order that we have worked for generations to build, ordinary men and women are too small minded to govern their own affairs. Order and progress can only come when individuals surrender their rights to an all powerful sovereign.”  ~Barack Obama

Screw your treasonous rhetoric. Sound like a combination of Loki (Avenger's film), and Darth Vader (Star Wars' film) much?

I will now be changing my party affiliation to INDEPENDENT because I am a Centrist, Independent, well-researched, Classical Liberal.

Watch out Progressives, Socialists, Communists, and Rinos... I have an axe to grind. I am tired of entitled elitists changing laws to make themselves rich and everyone else poor to push socialism and communism as viable solutions when these economic/government philosophies are repeated disastrous failures all across the globe no matter which country implements them.

Independent sovereigns are coming for your terrible new world order. We are going to win through policy and legal means that are nonviolent so much so that it will make your international order and anyone like you bleed from your orifices just for thinking about imposing your vicious, evil will upon the world.

I do not want to hear or see from Barack Obama or Michelle Obama for the rest of my life. That goes for Bill and Hillary Clinton as well.

Obama... was never my President. He is the elite's hand picked traitor.

Posted by Villa de Paz Gazette at 4:09 AM