Editor, DL Mullan
2016 Election / President Trump
_____________________________
what i believe as an American and what President Trump alluded to in his Inaugural Address this morning is that you cannot bring down America to create equity in the world; you have to bring the world UP to the standards of America.
it's not about America the isolationist country, we hate everyone now. it's about redefining what success is. Globalists believe success is everyone on the dole everyone sick and hungry, everyone fighting each other so the Globalists can sit over the rest of humanity like gods.
that ended today.
but it's not President Trump's responsibility; it's ALL American's responsibility to create a country that doesn't look like the last embarrassing two years of rioting and looting b/c George Soros didn't get his way.
not everything is going to go everyone's way. welcome to a multifacted culture. we will win some. we will lose some. yet it is not the destination... it is the journey.
you want to shape the future? then do it. i do not want to see rioting or looting anymore. if you cannot be a civilized adult, then stay home. i do not want to see you on tv or hear about your antics on the internet.
remember, Trump is not a Republican or Democrat. he is a populist leader. he is a business man. so rioting and having tantrums are not going to persuade him. he is a man who wears his heart on his sleeve, his religion on his lapel, and his patriotism for all to see.
so when drafting rebuttals... appeal to those characteristics in order and in business format. make sure you have dotted your i's and crossed you t's. use good logic, tact, as well as citation. use this formula and you will see a well thought out response from President Trump.
Social Justice insanity is not going to work. Race baiting is not going to work.
So on Monday, my job as an intrepid journalist begins. we are going to hold President Trump accountable for what he says and what he does... but remember YOU are going to be held just as responsible.
Americans are responsible for the deterioration of their country under the Globalist, Unitied Nations control. Time to get off your asses. You want a better world? It's now our time to make that happen... again.
Because when America is healthy, we can help others around the world. When America is unhealthy, we can help no one, not even ourselves. Make America Great Again is not an isolationist philosophy; it's a battle cry to make all countries of the world join us in prosperity.
Are you ready? 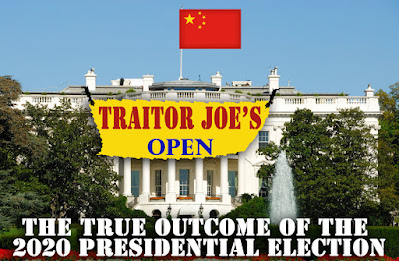 Today in 2020, the day after the illegitimate installation of the Communist Dictator, Joe Biden:

America has a bunch of sore losers and winners taking power. It is up to you, America, to reject 46 and the policies of the mob.

America is our country, not theirs.

Throw these traitors out on their ears, legally and lawfully with impeachment, recalls, censures, and whatever else is available.

Don't let the lie of Joe Biden stand. Counter it everywhere you go.

Write the White House too: www.WhiteHouse.gov/contact. Tell Joe Biden how he is illegitimate everyday that he sits illegally in the Oval Office. I am.