Earlier today, Hillary Clinton was on Twitter complaining that the current administration banned Transgendered individuals from serving our nation via the military.

Yet Mrs. Clinton used Twitter's Terms of Service to attack a disabled person. She falsely accused this disabled editor of Hate Conduct/Speech for pointing out facts.

Unless someone can enumerate the hate filled content in the below statement: 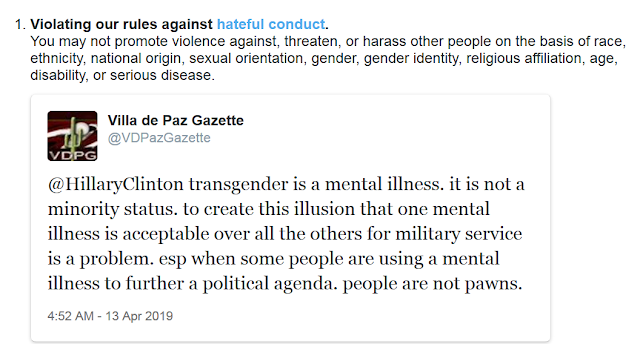 So I lodged a complaint in my response to Twitter and will shortly see if there is a complaint I can file against this political retaliatory action through the FCC or other federal agency. My free speech was violated. I was respectful in my conveyance of the way Transgender people are abused by political figures like Hillary Clinton instead of receiving the mental health support that they so need.

Mrs. Clinton, this type of negative behavior is exactly why a good portion of the American electorate did not see you as worthy, professional, or capable of being President of the United States.

I would refrain from making such immature decisions in the future.

If you cannot conduct yourself in a manner befitting a public figure, then perhaps you should retired from public life altogether and let the adults handle our political, social, and economic challenges that face the United States of America.

You have displayed retaliatory behavior against a disabled woman and positioned yourself to harm people with mental disorders for political gain.

That is shameful indeed.

Twitter is no better enabling such conduct amongst a swath of celebrities and politicos at the cost of others free and protected speech.

Isn't about time you all grew up?