What Happened to the Basic Law of Hong Kong Special Administrative Region? Did Beijing Commit a Breach of Contract and Allow Hong Kong to be a Free Agent?

After Beijing took over control of Hong Kong on July 1, 1997, a new doctrine was supposed to take shape called One Country, Two Systems. Yet, at every turn, China has reneged on its Basic Law contract with the residents of Hong Kong.

In the 1984 Joint Declaration, the Chinese government declared that Hong Kong would become a special region of China that would enjoy “a high degree of autonomy,” vested with “executive, legislative and independent judicial power.”

Many in Hong Kong are still waiting for the Communists in mainland China to honor the internationally binding treaty. In 2017, Hong Kong residents took to the streets to protest China's breach of contract in the matter of suffrage and open elections. Two Hong Kong residents spoke about their concerns:

Mrs. Chan also said the white paper that China’s State Council released last month “calls into question Hong Kong’s high degree of autonomy and implies that this degree of autonomy can be given or taken away at Beijing’s pleasure.”

And Mr. Lee, the lawyer who was a member of the panel that drafted Hong Kong’s Basic Law, which serves as its constitution, said that the white paper was a blow to the independence of the Hong Kong judiciary because it imposed political requirements on judges.

According to the international treaty between the United Kingdom (Britain) and China, the Sino-British Joint Declaration creates a mini-constitution for Hong Kong. This Basic Law is a legally binding contract that must be upheld. China is changing the terms of the agreement to the point of interfering in Hong Kong's legal and legislative systems as well as not protecting the resident's rights and freedoms until 2047 as a special administrative region. 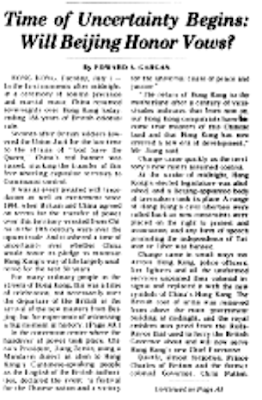 From the actions of the Communist Chinese that has led to multiple breaches of this international treaty, does that give the residents of Hong Kong the legal maneuvering to become an independent state?

With China increasing its violent attacks on protestors this month in August 2019, Hong Kong may have to initiate legal action in order to break free from the communist terrorist acts in the form of communist police, undercover operatives, and military force.

Since many in Hong Kong have been photographed waving American flags and filmed singing the American national anthem, is this a sign the residents of Hong Kong are willing to break from China completely and become a member, a territory or state, in the American union?

That is cheaper than buying Greenland and Hong Kong already has its own infrastructure built right in.

Does President Donald Trump have the courage to tell China: You're Fired?