Is the Council on Foreign Relations... A Modern-Day Domestic, Technological Terrorist Organization?

Editor, DL Mullan
CFR / Terrorism
_____________________________
Who wouldn't wonder?
The Council on Foreign Relations, or CFR, was established in 1921 as a private, bipartisan group to “awaken America to its worldwide responsibilities."
Aw. Who wouldn't get behind such a noble cause?
"A well-known Council member famously explained, that they transformed the American republic into a global empire, albeit a “bene­volent” one..." but scratch American, that was for the 20th Century, replace the pronoun for the 21st Century: CHINA, and forget about being benevolent.
The CFR has lost its way and sees its "Empire" just like the one we were all warned about in Star Wars. If we were to cast this movie, Emperor Palpatine would be David Rockefeller (1915-2017), who finances the group along with the Trilateral Commission and the Bilderberg Group. Darth Vader would be all his minions like John Kerry, Dick Cheney, Bill Clinton, Robert Mueller, Rupert Murdoch, George Soros, and many, many others who believe in Mr. Rockefeller's idea to destroy all nation states, create a global dictatorship, and to hell with everyone else. 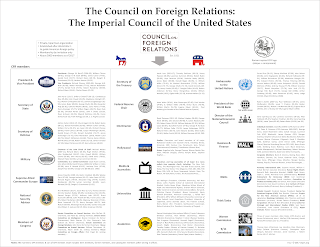 And, the CFR membership list shows the vastness of the problem:
So to say that the CFR is influential is an understatement. The group has their tentacles in everything. Everything but common sense. The truth is the CFR has grown so much that the group has outgrown their own usefulness. 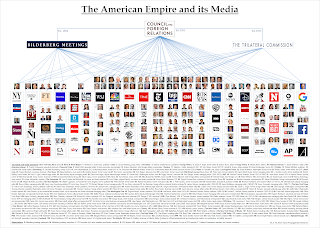 Now all we hear from CFR members is bitch, bitch, bitch and wah wah wah temper tantrum theatrics for political pundits on their mainstream media shows, who just happen to be CFR members (or equivalent) themselves (George Stephenopoulos, Joe Scarborough, Mika Brzezenski). Of course, members whine like babies to each other in their "safe space": the CFR website.
In a recent article in Foreign Affairs, the CFR magazine, a former general wrote that there needed to be an end to the "America First" policy. Say, what? What is the CFR's problem with America First? Because a Globalist vision means that America becomes a Third World country as a defunct nation state so the remnants can be absorbed into the one world government model of a global, communist dictatorship. You know, the United States should collaborate with others... to make CFR members wealthy and China the world power. Just submit... the CFR means: collaborate!
Except Americans know what "collaboration" entails: there's a boogeyman, send in the troops!, 100 years war, the commoners supply the cannon fodder, taxpayers are scammed out of trillions of dollars in defense contracts (most are no-bid), the country in question is destroyed, people are misplaced (mass immigration), domestic rights and freedoms are attacked (Patriot Act/NDAA), and then the CFR alum go in and "rebuild" the nation they just destroyed for profit, power, and influence.
Did I get that all correct? Oh I missed one: pat yourselves on the back for bringing "democracy" to a nation that didn't need it.
I just described the aftermath of 9/11.
Yes, we know what influential dictators are all about. America has a slew of these think tank tinkerers in the political bowels of our nation. The question is: can America afford to indulge anymore half-witted, hair-brained, influence-peddling, ego-maniacal tirades of the Council on Foreign Relations, any of its offshoots and its dim-witted acolytes?
I know the world cannot afford their "benevolent" malfeasance any longer. It's war, War, WAR; fear Fear, FEAR!
We're done with your military grade psychological warfare operations (ShadowNet) being played by your minions and their foot massagers. If you have to use coercion, then you don't have a political platform; you have communism. Communism means the United States is no longer a Constitutional Republic...
So that is why you hate President Trump that much. He took away your pacifiers of greed (Federal Reserve), corruption (Clinton Foundation pay to play), and debauchery (Jeffrey Epstein's Island). Then he told you to get your Sunday best on because he's taking you to church!
The nerve of some people!
The fact is that the American people did not vote you into any public office. CFR members have to be "appointed." When has a candidate run for an election touting the CFR platform? Joe Biden? In order for Americans to vote for your platform, you have to offer internet freebies (which are never free; you have to pay shipping) and your candidate has to be half-out of his mind?
Seriously? That does not add up to victory, but I could be wrong; I didn't take Common Core math.
Let's think about this one, shall we? The CFR ran Joe Biden. That's embarrassing. I'm embarrassed for you. My cat even said she is embarrassed for you.
But that shows the level of hubris the CFR has fallen down to that the membership are so tone deaf to the rest of the world as to offer a dementia patient being paraded around in a soap-opera-style elder abuse scene as a viable presidential candidate.
Americans rejected that idiocy because we want reality. A real guy in the White House, with a real family who thinks of others instead of themselves. An ideal that CFR cannot offer.
Shocker.
The Council of Foreign Relations has sunk so low that the membership has become a group of champagne-drinking, cocaine-sniffing, foot-job getting grifters... Oh, wait, that's Hunter Biden. Have you seen his laptop?
The CFR enabled that behavior because it is their behavior too: joy-riding scammers on the backs of the American people.
Speaking of scams... Americans lived through the shoe bomber and Michael Chertoff's need to profit off "body scanners" for the airports. Dick Cheney's need to clean up the gulf oil spill with his newly purchase Boots & Coots through Haliburton. CFR members like these ones have an addiction for government funded corporate welfare, er... contracts. Especially: no bid contracts. What? Can any of you make an honest living?
It's like living in a game show: I would like to buy today's CFR Member's Scam for $100 Billion: Defund the Police. That's right! With the need to get rid of and replace the police for no reason whatsoever, the elite ruling class wants to give you security: ROBOTS!
Danger, Will Robinson!
Who is going to profit from this fake news hysteria? General Jones? General Hayden? General McCrystal? Brennan? I have a list of CFR degenerates; I can keep going. I did watch Shadow Gate 1 and 2; I took notes too.
The question becomes: do we really need the Council on Foreign Relations?
Or... do they need us? Because there seems to be no benefit to Americans or the world to having these think tanks.
Guess that is why the David Rockefeller funded Council on Foreign Relations, CFR member: David Rubenstein at the Carlyle Group, and CFR member: William Kennard at Staple Street Capital bought (Venezuelan/Canadian) Dominion Voting Systems machines so they could hack our reality by rigging the game?
Because they cannot win unless you play the game: Collaboration.
Sources: Breitbart, Foreign Affairs, Swiss Policy Research, CFR, Looking Into It, Off Shore Energy, The Heavy, Carnegie Endownment, Dominion Patents, David Harris Jr., Millennial Bridge,

Posted by Villa de Paz Gazette at 4:23 AM