After most of March 2016 was inundated with lines in the sky and blotting out the midday sun, the El Nino pattern kicked in and relieved our scorching desert with some rain.

The United Nations, NATO, and the Joint Chiefs of Staff are the usual suspects when it comes to climate engineering, and therefore, this article names these entities for the destruction of Earth's ionosphere, ozone layer, general messed up weather patterns, droughts and destructive storms.

Yesterday afternoon, Phoenix, AZ was again hit by climate engineering that sinks down into our breathable air column and poisons us all: 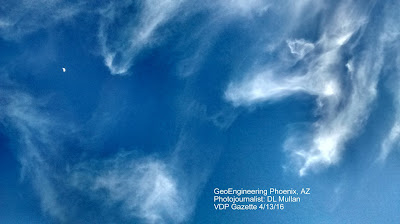 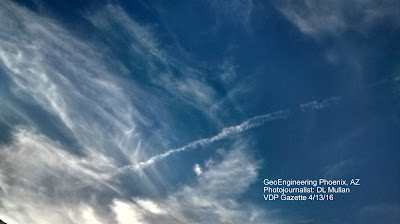 This morning began another round of our modern governmental and industrial ecoterrorism: 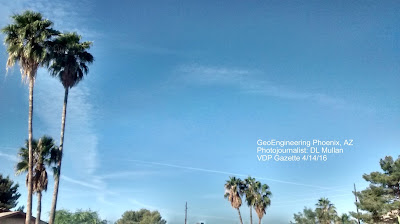 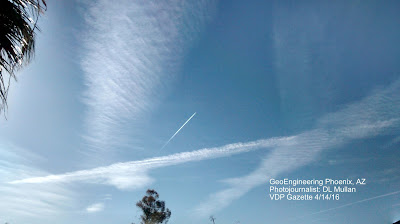 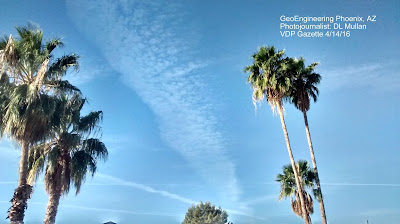 All the while our local and state officials remain quiet on this destruction. Our beautiful blue skies that used to reach across the Valley of the Sun are once again damaged. Even the local weather personalities are mum as our skies are sprayed nonstop throughout the seasons.

If you want our blue skies to return, then start complaining from our local city governments to the Governor's Office as well as the news stations. I would also suggest contacting the Air Quality people and the EPA.

Global Warming has failed to grip humanity in fear so organizations and entities seek to create Climate Change instead.  Ever wonder why some people are going out of their way to create problems? To destroy?

For more information on geoengineering, please visit GeoEngineering Warch and post your photos on Skyder Alert.

Every little bit of light shown on this topic takes it out of the lies of silence.

Posted by Villa de Paz Gazette at 9:00 AM