Pollution Advisory Made Worse by Chemical Clouds, GE Report for 4.19.16

A Pollution Advisory has been published for the Phoenix Metro area, but the discussion stops there while jets line the sky with toxic chemicals.

Solar Radiation Management program's chemicals have been known to linger in the atmosphere for 22 hours. So as the dirty brown cloud inundates the city's skyline, chemical clouds make the pollution worse, not better, by not allowing the heat transfer at night. That means what is low cannot be released into space because the chemicals in the atmosphere will not allow the normal, natural exchange. 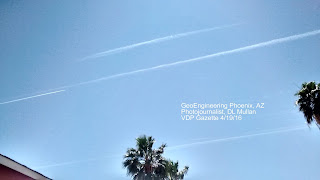 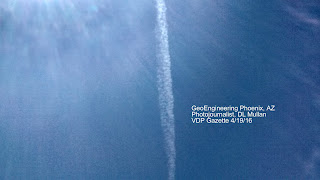 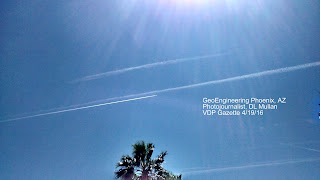 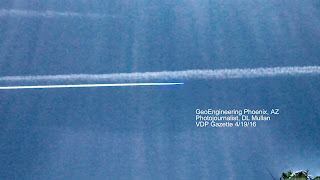 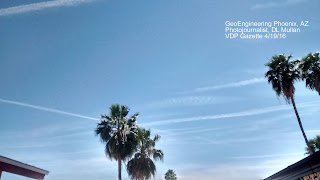 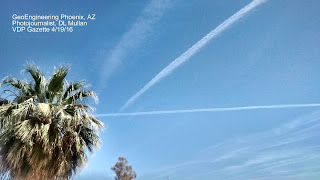 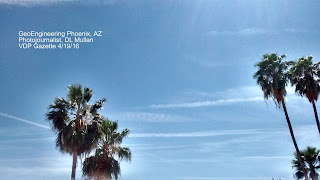 As Americans, the world over, we are pointed at as the cause for wicked weather because of our energy usage and supposed carbon emissions, when are we going to start demanding answers for the United Nations and NATO's poisoning of our skies?

Or questioning the EPA for their lack of action against weather modification programs over US skies?

Until these weather control programs are halted, there can be no real discussion of our climate, even the arguments based on United Nations' own propaganda. How is that poisoning the atmosphere negates the supposed poisoning of the atmosphere by people on the planet? It doesn't.  There is no logic to the UN's climate debate anymore.

Time to end the lies of global warming and climate change. The People of the Earth do not want nations to weaponize the weather for their own quiet wars while telling the rest of humanity we are the cause of global destruction.

We are tired of the lies to fill the pockets of a few.