Let’s Give Up on the Constitution, an article in the New York Times Op-ed section, by Louis Michael Seidman, who is a professor of constitutional law at Georgetown University and he stated:

As the nation teeters at the edge of fiscal chaos, observers are reaching the conclusion that the American system of government is broken. But almost no one blames the culprit: our insistence on obedience to the Constitution, with all its archaic, idiosyncratic and downright evil provisions. 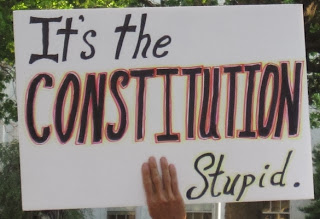 If you do not like how the country is run you need to either go live in North Korea and let us know how that turns out or start holding politicians accountable.

No more laws for us and laws for them. No more insider trading or becoming a multimillionaire in office on an approximately $200K salary. No more spending money on campaigns for a political position that can never pay it all back. No more taking money from corporations. No more stealing money from Americans through the illegal use of the Internal Revenue Service. Just NO MORE.

If you do not adhere to the Constitution, then you get recalled or voted out of office. No more putting up with globalism or international laws that supersede our national sovereignty.

Also, if you had not noticed: our failed policies, politics, and laws are not about our Constitution or system of government. It is about the Hegelian dialectic. Problem-reaction-solution.

Someone toils in the night. Problems arise. The public is angry: Fix it! The government responds: We have the solution! But the government never tells the people that they caused the problem in the first place. The problem was created in order to affect social change. Change that would not have happened in the natural ebb and flow of the human experience.

This scenario is played day in and day out especially on the national news. Our immigration system is broken! People demonstrate in the streets. The government wants to reform the immigration laws of the nation... Problem is there was no problem to begin with. Only a certain amount of people want to change the laws to their favor for breaking the laws that now subject them to deportation.

It is not difficult to deduce. Someone wants to change society to fit their agenda and not within the confines of law. So a fictitious problem is created and anyone who sees through the scheme is vilified.

Which is where higher education institutions come into play. University instructors should be debating these issues but instead of teaching our heritage as positive solutions to current and made up problems, professors are screaming: The government is broken! The Constitution is evil! We must change our system!

Change it to what? A rule under technocratic elitists who run corporations and the United Nations so then we no longer have guaranteed rights but now must live under the system of a one world government in which people have "privileges" instead?

Obviously someone must be friends with a crack pipe and he is not alone. A professor at Texas' A&M believes the Constitution is not for anyone either as noted in an article on PrisonPlanet:

Mary Margaret Penrose also admitted that she teaches students in her Constitutional law courses that the Constitution and the Bill of Rights are obsolete. “Why do we keep such an allegiance to a Constitution that was driven by 18th Century concerns?” she asked.

This feigned argument begins here and there. From the disputed GW Bush rant that the "Constitution is just a goddamn piece of paper" to politicians who act like the Constitution is not there to direct their activities and now constitutional law professors hating on our national document for problems not derived from the living testimony on how we as Americans should conduct ourselves and our government, these behaviors are a national embarrassment.

It is a ruse to get Americans to doubt the veracity, hope, and fortitude of the founding documents of the United States. So that Americans will believe there is a problem where there is none. The manipulation is to make the American people leave the confines of their freedoms and rights for a more structured, surveillance state known as a one world government. For that, charges of sedition should be levied as well as tenures pulled for these professors, and perhaps charges for politicians as well.

If someone does not like the Constitution, there is the door. No one is keeping you here. These professors are way out of line and their respective institutions need to reign them in. These so-called professors should be fired from their positions, forthwith!

It appears that these university teachers do not know or understand how societies change over a long period of time, not just in 237 years, but longer. Educators need to comprehend the complex economic, political, and social engineering crises caused by a few despots who wish to accelerate human society and use some brainwashed mass lecturer who will decide to vomit libel sedition from his or her pulpit for the task. Hence the conclusion that educated people do not always mean smart.

The Constitution, Bill of Rights, and Declaration of Independence are not documents headed for the shredder. People who will not abide by their oaths of office are the problem. These government servants will not control corporations, banks, Wall Street, or industries that fill their political coffers.

In essence, professors, the problems of the United States are your fault for not standing up against a government who walks on the very words you are supposed to hold so dear.