The Consumer Price Index is Rigged Against Social Security Recipients

The federal government is again cheating those people who rely on Social Security a real cost of living increase:

The 1.7 percent cost-of-living adjustment, or COLA, will also boost government

benefits for millions of disabled veterans, federal retirees and people drawing disability payments for the poor.

But what if the numbers we are being fed are inaccurate because of a numbers game and political maneuvering?

That is where the Alternative Consumer Price Index comes in. Why can there be an alternative?
Let's take a gander at the charts: 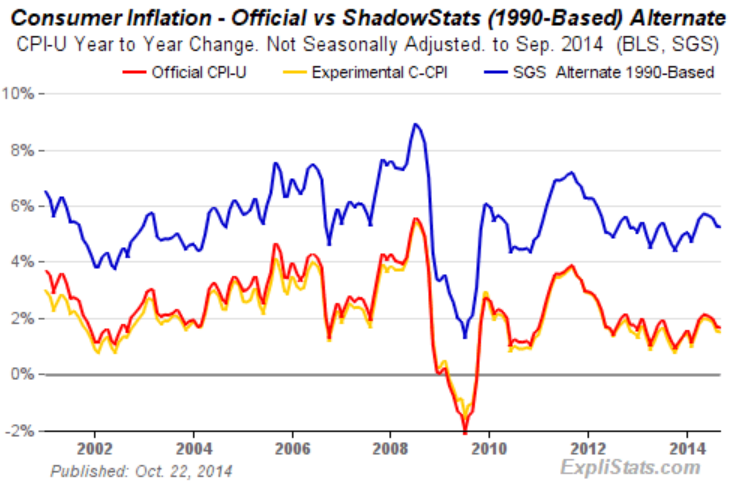 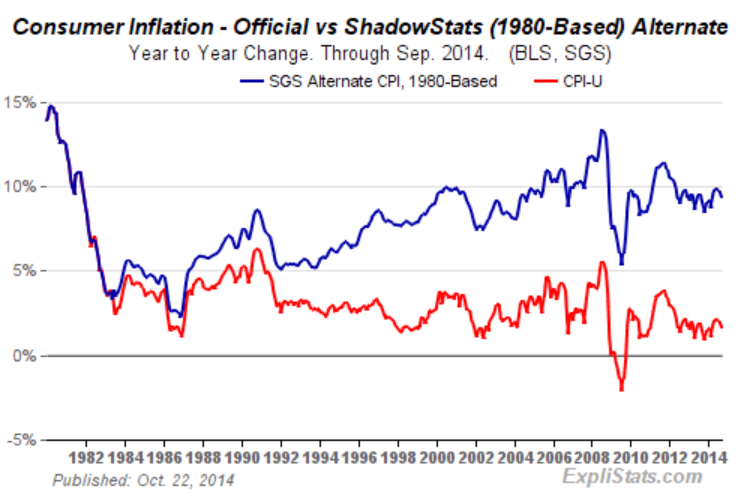 So the Consumer Price Index is rigged like a shell game. An accurate inflationary rate is nonexistent. What does that do to people who rely on the Social Security system:

"Seniors across this nation understand how important having an accurate measure of their real costs is to their day-to-day survival," said Max Richtman, who heads the National Committee to Protect Social Security and Medicare. "While there has been a lot of talk in Washington about the need to find a more accurate COLA formula, unfortunately that attention has largely focused on ways to cut the COLA even further."

Once upon a time, the CPI was used to calculate and maintain a constant standard of living. Now the CPI is used as a political and cost cutting tool. All the while, the CPI does not allow individuals on a fixed income to keep up with customary societal cost increases.

The Boskin Commission Report, December 4, 1996, actually used steak and chicken for its substitution example. The examples used in arguing for changing the CPI clearly were tied to prices rising and resulting consumer demand shifting to a lower-quality product. Simply put, that was the destruction of the cost-of-maintaining-a-constant-standard-of-living concept and was the primary consideration of those seeking to change the CPI, although other issues would come into play. The drive here was as to get a lower inflation reading, irrespective of whether the data were “more-accurate.”

If you want to read more, check out: No. 515—PUBLIC COMMENT ON INFLATION MEASUREMENT AND THE CHAINED-CPI (C-CPI).

Because the bottom line is more important to elected officials than maintaining any acceptable standard of living for the elderly or disabled.

Kudos. That is a true Christian stance, not.

When it comes to increasing the salaries of Congress, all bets are on the fact that the CPI is not used, but is rather a self-congratulatory raise of ten percent or more. Maybe we should tie Congress's pay increases to the same CPI used for Social Security recipients. While we are at it, we should take away Congress's premium health care and give them Medicare, then we will see how fast that program is fixed for real usability.

Then perhaps debates over Chained CPI and other measures to decrease spending at the cost of people will end. Of course, we could just stop a war or seven. Maybe we could cut costs by halting defense spending on illegal actions against sovereign nations.