Air Quality Hazards Not a Myth

New Year's did not disappoint this year. 2014 began with air quality in the Unhealthy Range. 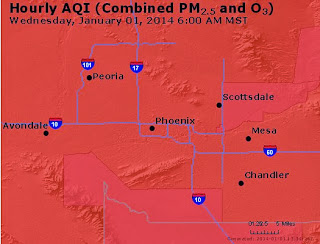 At 6am, the Valley's stagnant air coupled with fireworks and fireplace activity resulted in a 181*, the unhealthy range of air quality. The Pheonix metropolitan area and surrounding cities lie in a valley between mountain ranges. With light wind regimens and winter inversions, the air quality suffers.

People with respiratory conditions suffer the most from the dirty air so low in elevation.

So when someone says the air quality, smog concerns, or fireplace and firework restrictions do not apply to them because they have the right to do whatever they want, show them the reality of their choice.

The International Agency for Research on Cancer declared on Thursday that air pollution is a carcinogen, alongside known dangers such as asbestos, tobacco and ultraviolet radiation. The decision came after a consultation by an expert panel organized by IARC, the cancer agency of the World Health Organization, which is based in Lyon, France.

"We consider this to be the most important environmental carcinogen, more so than passive smoking," said Kurt Straif, head of the IARC department that evaluates cancer-causing substances.

Although we know that government agencies and scientific data can be manipulated to serve whatever ends some global warming or climate change scammer wants, unhealthy air affects everyone in a negative way like it or not.

Tuesday's PM-2.5 HPA has been EXTENDED through Wednesday, January 1, 2014... Little change is expected in the weather pattern the next several days. Phoenix will see daytime highs in the upper 60s to low 70s through the weekend under sunny skies and relatively light winds. Stagnant conditions will keep the abundant smoke from fireplaces and New Year's fireworks near the surface through Wednesday morning. This will send PM-2.5 concentrations into the Unhealthy range. At these levels, everyone is affected, not just children, elderly, and people with existing respiratory issues. Statistics show an increase in emergency room visits due to respiratory distress during Christmas Eve/Day and New Year's Eve/Day. Thus, we are extending Tuesday's High Pollution Advisory through Wednesday. This carries automatic Maricopa County-issued wood-burning restrictions. Check back tomorrow for more. Until then, have a Happy New Year! -J.Paul

So as I suck on my oxygen this morning and take fists full of supplements in order to breathe in this thick air, please remember some ideas of pollution control like restricting unnecessary fireplace usage a few nights a year can save lives and health.

That is not too much to ask, now is it?

A selected part of the chart from Air Now, below, defines the Unhealthy range of Air Quality: