The Matrix Reality for Chickens, Are We Next?

Just because we can do something, doesn't mean we should do it. 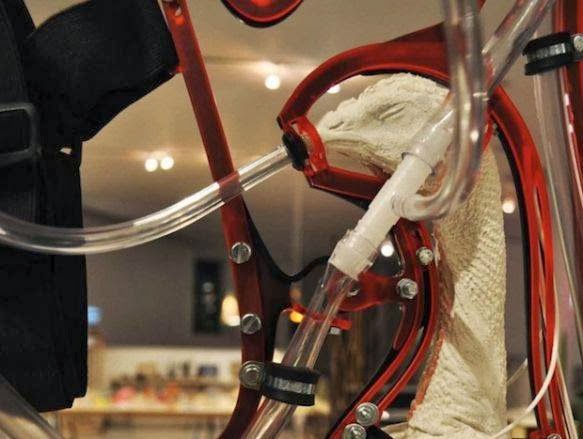 This image could be the future of chicken farming. That's right! The Matrix now serves dinner too!

Doesn't this image make you sick?

Instead of providing land and space for chickens, big agriculture is toying with the idea of making brainless birds. In addition to this art installation piece, agribusiness “philosopher” Paul Thompson has suggested breeding blind broilers, since studies show that they respond better to the stress of packed sheds.

Royal College of Art student André Ford created the installation, dubbed The Centre for Unconscious Farming. It’s a pretty grim affair, made of a massive steel frame that would contain up to 1,000 birds. In it the chickens are completely immobilized—their feet are removed (to save space), and the birds receive food, water and oxygen through an intricate network of tubes. In order to eliminate the suffering that chickens would face under such conditions, Ford proposes that the birds’ cerebral cortex be removed, leaving the brain stem (and key homeostatic functions) intact. The chickens would continue to grow, but would basically spend their lives in a coma.

The only thing this line of thought proves is that some humans are the ones in a coma.

Broiler chickens live short lives, about 6 to 7 weeks. The United States consumes almost 8.5 million chickens a year. These birds are put in cramped, filthy, and dark rooms until they are slaughtered.

So our two best options appear to be either blind chickens or make them grotesque Matrix models?

As long as their brain stem is intact, the homeostatic functions of the chicken will continue to operate. By removing the cerebral cortex of the chicken, its sensory perceptions are removed. It can be produced in a denser condition while remaining alive, and oblivious.

The feet will also be removed so the body of the chicken can be packed together in a dense volume.

Food, water and air are delivered via an arterial network and excreta is removed in the same manner. Around 1000 chickens will be packed into each 'leaf', which forms part of a moving, productive system.

Us omnivores, we don't want brain dead chickens. We want happy chickens. Chickens who frolic in the sun, play in the grass and dirt, and eat bugs. We want healthy chickens, not ill birds or birds pumped full of pharaceuticals.

How about big business stop trying show how evil and nefarious they are and actually become humane guardians of the food supply? A happy chicken is a healthy human child.

Is that really so much to ask? Or are you trying to prove you can do it before trying it on the human population? Either way, it seems like our scientific minds view everything on the planet as cogs in the wheel and not creatures who deserve some respect.